How I insured Angela Mount’s taste buds for £10m

It’s one thing to create a PR campaign that results in blanket media coverage at the time, it is quite another to be involved in a campaign that is still talked about nearly 15 years later. Phipps Managing Director Nicky Forrest looks back on how she helped insure Angela Mount for £10m and wished she had been involved in a Kleenex campaign.

What was the best campaign you were involved with?

Looking back over a long PR career there has always been one Phipps campaign that stood out for its sheer simplicity. It was a one off news story and didn’t cost very much to implement, but the idea was so brilliant that it had the national media clamouring to cover it. Some of you might remember the campaign; it was for Somerfield.

Somerfield came to Phipps back in 2003 and, as part of a wider brief, asked us how to increase sales over the Christmas period. In traditional agency fashion we got some of our top creative people together and held a brainstorm asking the question: “How do we get consumers to believe that Somerfield’s wines are so great that they have to go and buy some?”

Some of you may remember the resulting campaign.

What was the idea behind it?

To insure the taste buds of Somerfield’s head wine buyer, Angela Mount, for the sum of £10 million.

When we pitched the idea to Somerfield, they called the next day and asked if they could buy the idea from us. This was a career first for me. An idea so good that the client wanted to pay for it, without us actually implementing the campaign. Believe me, in the PR world this never happens.

To cut a long discussion short, we finally agreed that Somerfield would pay us for the idea and that Phipps would also implement the campaign, just as soon as the insurance was in place.

Why did the campaign work so well?

PR is all about storytelling; it’s about how you package up the idea to resonate with the media and ultimately the consumer. Your story needs to have what Phipps calls the ‘four R’s’. It’s got to be real, relatable, re-tellable and it’s got to get a reaction. It also needs a bit of a twist and an element of surprise.

So we took Angela Mount and insured her taste buds for £10 million. Pretty simple. But if you look harder you’ll see that there are actually two twists to this tale. First of all Somerfield isn’t Berry Brothers & Rudd, or a long-established, bastion of the wine world. And secondly, insuring working mum Angela’s taste buds begs the question – why is she being insured when she’s not a celebrity? It had to be because of Angela’s taste buds. They had to be unrivalled. Capable of detecting the best wines and bringing them straight to Somerfield’s shelves.

“Your story needs to have what Phipps calls the ‘four R’s’. It’s got to be real, relatable, re-tellable and it’s got to get a reaction. It also needs a bit of a twist and an element of surprise.”

How did you go about selling the story to the press?

Selling the story to the media was easy. The previous week Anthony Worrall Thompson had his fingers insured for £1 million, so we rode off the back of it. Our story had a far bigger number, and because Angela wasn’t a celebrity, it took off and soon her taste buds were being compared to JLo’s butt, Beckham’s right foot and Betty Grable’s legs.

Soon enough consumers up and down the country started reacting, saying to themselves: “Wow, Somerfield’s wines must be seriously good if the wine buyer has had her taste buds insured for £10 million – I’ll go and see what the fuss is all about.”

It wasn’t all a breeze, though. The day the story broke Angela had laryngitis and as a condition of her insurance, she couldn’t do media interviews or risk damage to her throat. We had the Today programme chasing us for a slot that we couldn’t give them; I’ve never been in that position before or since.

Later that week when she recovered we took her on the rounds of the lunchtime news rooms who tried to insist that she did a blind tasting live on air. As PRs, accustomed to protecting clients from the media and not leaving anything to chance, we insisted to the producers that she knew what the wine was beforehand.

Every national newspaper covered the story in depth, and there were multiple slots on the news and broadcast media.

What impact did the campaign have? 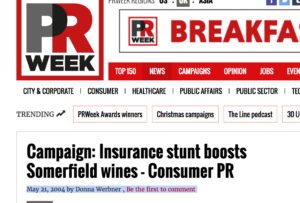 Of course, you can get all the coverage in the world, but if sales don’t increase, and your objectives aren’t met then you might as well not bother. On the back of the PR campaign Somerfield’s wine sales increased by 19% in December 2003 on the previous year.

From an agency point of view, the campaign meant Phipps won several marketing awards – which is always nice. Funnily enough, no awards from the wine trade. The campaign didn’t go down at all well there. Feedback came in, saying this was ‘not a suitable campaign for Somerfield’ and that it ‘would have worked better for Waitrose’. Back then, the campaign was seen as a step too far, but I think that the wine trade is better now at talking to the outside world.

The other thing that the story has (a fifth R if you like) is the ‘ripple’ effect; even 14 years later, the story is still referred to whenever a new insurance story pops up. What Phipps created for Somerfield was a timeless story, like a classic movie that gets repeated at Christmas.

The campaign I wish I’d done
One campaign that I wish I’d created is the Kleenex ‘Let it all out’ campaign. For years Kleenex focused, in a very literal sense, on cleaning up emotional mess. But spotting a trend in emotional expressiveness, it changed tack and started to develop the idea that focusing on emotional health and letting emotions out makes you feel better.

How did it work?

The campaign took a simple sofa on tour, starting in New York, and encouraged people to sit with them and share their ‘let it out’ stories. There were plenty of tears along the way and a few laughs, plenty of feel good hugs and, of course, the ubiquitous box of Kleenex.

There was lots of content for TV ads, YouTube, social channels – plus a great soundtrack to accompany it all by Starrfadu – and of course the obligatory 0800 number for consumers to get involved, sharing their own stories.

Why do you think it was so successful?

It was a huge success, partly because it was trend driven, but mainly because it created an extraordinary feel good sharing platform. It built such a strong bond between the brand and the stories about seminal moments of its consumers’ lives.

A brand can’t create a stronger bond than that. Kleenex managed to become an integral part of people’s stories; the birth of a child, the death of a parent or graduating from college. Kleenex somehow became part of those stories and wriggled its way in to take centre stage in those key moments. It’s almost outrageous and definitely genius – and I wish I’d done it!

Tell us about some of the work that Phipps is doing now?

People often ask me what Phipps does and the short answer is that we are a specialist food and drink brand communications agency. Our toolkit is varied and we use PR, social media, events and trade promotions as part of our mix. Some of our client’s in the drinks world that we’ve worked with over the years, and currently, include Wines of Germany, Wines from Rioja, Marks & Spencer, Sainsbury’s, Matthew Clark, The Bureau National Interprofessionnel du Cognac, Tio Pepe, Veuve Clicquot, Ruinart, Krug, Lanson and Blends Wine Estates, Cono Sur, Portobello Road Gin, Pinkster Gin and Regal Rogue. We only work with 10 clients at a time and we are the most awarded drinks agency in the UK.

This article originally appeared in The Buyer.

Bubbling up: the German Sekt revolution