The origins of the humble burger

There is a lot of debate about where and when the humble burger originated from. The first claim to fame was from the Mongol armies of 1200AD, keeping the raw meat under their saddles, flattening and tenderising the meat as they rode. It is not the archetypal patty and bun burger, but it’s a start.

In a brief stop off/invasion in Russia by the Mongol armies, the flattened meat was adopted into Russian cuisine. The Russians’ derogatory name for the Mongols – ‘Tarters’ – paved the way for a delicacy you see on menus today, ‘steak tartare’.

I now bring you to the Hamburg part of the story. Germany’s largest shipping port, Hamburg, made frequent trips to and from Russia and America, appropriating ‘steak tartare’ as their own. Sailors from the two continents adopted the ‘Hamburg Steak’ in popular usage which found its way across the pond for good.

Now enter, America. Steak being cooked in the ‘Hamburg style’ emerged on New York streets, then finally in Oklahoma 1891, we had our first official record of a bun entering the mix. Some people like to call this the first ever Hamburger.

Over 100 years later, we now find ourselves surrounded by a worldwide burger culture – and we love it!

Cue Thursday 23rd August – National Burger Day in the Phipps office. Celebrating the humble burger in all its glory! Burgers now come in different shapes and sizes with a variety of patties, pickles, buns, condiments, spices, slaws, cheeses, fruits(?!) and what ever else you want to sandwich in there!

Condiments are crucial when assembling the perfect burger. With our wide range of patties and fillings, the consensus across the board were Phipps clients Frank’s RedHot Sauce and French’s Mustard. Two veterans of the condiment world and both equally crowned champions of National Burger Day!

Now for our burger joint of choice – Patty and Bun! 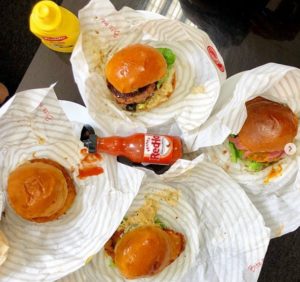 First on the Patty and Bun menu for a reason – this definitely hit top spot for more than one in the office. Filled with colour, smoky mayo and their legendary patty, you will get the most ‘instagramable’ burger of the year. 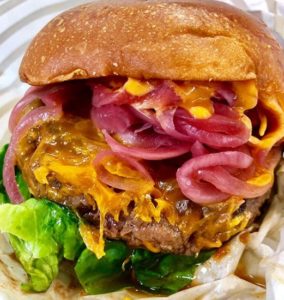 This ‘proper burger’ was worth the change from the meat patty. If you need a cheese hit and fancy feeling full for the next 24 hours, this halloumi burger is for you. 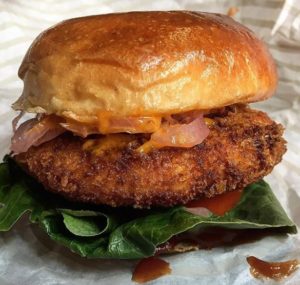 Stand aside KFC, fried chicken just reached a whole new meaning. Adding do the fried chicken list, this slaw heavy chicken burger lasted a record 90 seconds. This time has created rumours of a burger eating competition within the office.

Pickled aubergine, buttermilk courgette and lettuce lay the foundations of what looked like quite a vegetable heavy burger. But fear not, as this burger was graced by a strong meat presence with a lovely chunky lamb patty. Big thumbs up for this as an alternative to your standard beef burger. 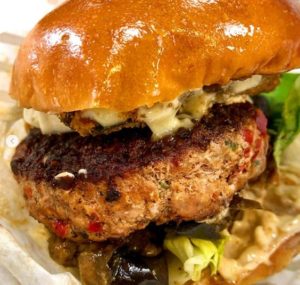 Nothing left but empty wrappers, a pile of messy plates and bellies full of delicious burgers – bring on 23rd August 2019!